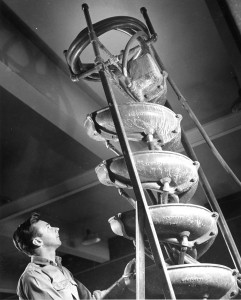 The Minerals Research Laboratory was established in Asheville in 1946. The MRL was a joint venture between the state of North Carolina and the Tennessee Valley Authority (TVA), and operated under joint control for its first five years. In 1950, TVA discontinued its support of the laboratory, and in 1954 the operation was transferred to the NCSU School of Engineering.

Even though they were now part of academia, the laboratory’s mineral engineers and geologists continued to examine and evaluate mineral samples for commercial potential. Over the years, the MRL identified many viable ore deposits which led to North Carolina’s rise to prominence as a world leader in industrial mineral production.

As the laboratory developed its technology and its reputation grew, the MRL shifted from being largely state-funded to providing the majority of its research efforts under contractual agreements with client corporations. Today, fee-for-service provides 25-30% of the MRL’s operating budget. The remainder is provided by the NCSU College of Engineering through NC State Industry Expansion Solutions, formerly known as the Industrial Extension Service, which took over administrative responsibility for the laboratory on July 1, 2004.

The North Carolina mining and mineral industry has over 700 active permitted mines, annual sales in excess of $800 million, and estimated employment of over 100,000 (including service and ancillary organizations). North Carolina continues to lead the nation in production of feldspar, common clay, mica, olivine, and pyrophyllite. North Carolina production continues to be third in phosphate, seventh in industrial sand and gravel, and eighth in crushed stone for the nation. The MRL has always been a results-oriented contributor to the mining and minerals industry.